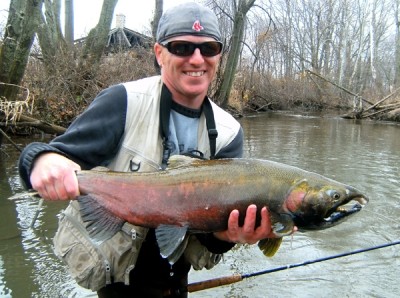 I was fishing with a friend today. I was coming downstream under a bridge. My friend was above the bridge. He said he saw 2 coho's fall downstream. I walked down just below the bridge. He said the fish were next to this grass under a branch. I could not see but he could so I took a cast holding the spinner in the current. This fish came out and nailed my Mepps. I never got to see or feel the fish hit. My friend had told me that he had the spinner in his mouth for a few seconds. When he said that I set the hook. Who knows how long it would of took to know that the fish had my spinner if it was not for my friend helping me out. lol