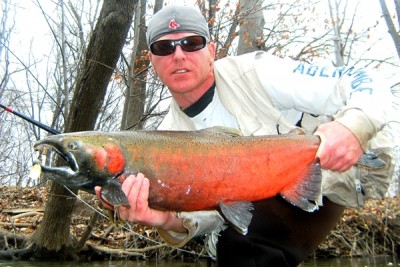 I just caught a buck that was sitting with 4 other bucks on my fly rod. I came back and there were 2 left getting ready to fight each other. I took a cast in front of one of them and he showed a bit of interest but would not bite. I then let my spinner go a bit behind him and was holding the spinner in the current in front of the other fish. Well the fish in front of the other turns around like he was going to bite the other fish but instead slams my Mepps. It's funny cause when he turned around the other was trying to move away from him. I was surprised he hit like he did! Fun catch!