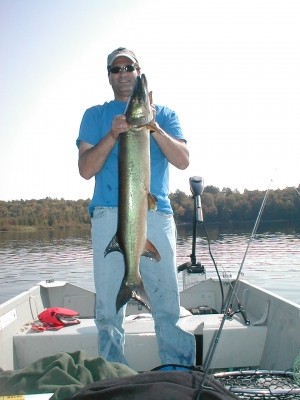 I was fishing for medium size northern late morning. I caught several just below the surface in the 18''- 25''range. The fish were coming from 4' to 6' of water off the shore. I made a cast out towards open water from the same position. I was using a small #3 dressed Mepps with an orange and yellow blade and as such I was using light line (6lb. test) and no leader. I lose a few lures but the action is improved. The Musky hit and after 20 minutes I had gotten it to the boat several times. I did not have a net large enough to get the fish into the boat. A family on shore brought me a larger net. After wrestling with the fish in the boat for a minute or 2 I was able to get its measurement of 44''. I revived the fish and set it free. I now use a leader even for the smaller fish. I find a light weight short leader still affords me enough action and I no longer get bit off by the Northern and Muskies. However, fish in the 18''+ size do bend up the lure pretty good and as such I buy at least a few Mepps every season.