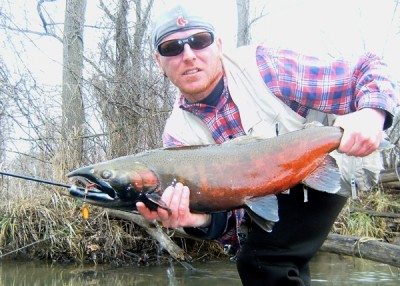 I was walking downstream in the water and saw this fish. I almost got too close. I was about 4 foot in front of the fish before I noticed him. I froze and grabbed my rod. But my rod was too long to get the spinner in front of the fish. So I had to grab the middle of the rod and jig the spinner. So I did that and the fish tried to bite a few times. After that he nailed it and was already shaking his head before I could get my hands back down to the butt-end of the rod to set the hook since I was holding the rod in the middle. lol If I would of moved back I think I would of spooked the fish. At least it worked out doing this trick today.