Musky Caught by Andrew with Mepps Aglia Marabou in Ontario 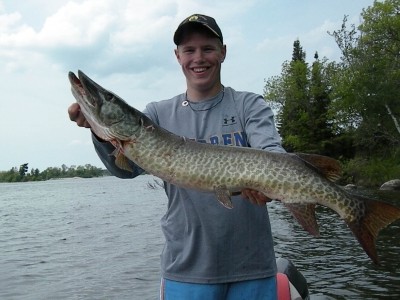 Out fishing Crow Lake, which is right across the street from the famous Lake of the Woods in Ontario Canada. We were fishing a couple different bays and we got into one that had a lot of good structure, downed trees, and some deeper reeds. Crow Lake (also known as Kagaki Lake) is a deep lake that is all spring-fed so you can often see as far a 15-20 feet down. This leads to many muskie sightings and you can often see your follow ups. Through the 7 years I have been heading to Ontario I have often found success in Mepps spinners, so I had tried my favorite orange and black and had no luck. I decided to throw on a racoon or squirrel-colored and with my 2nd cast into the bay I threw right into the reeds. I was mad at myself because I didn't wanna deal with hooking a reed, cause often times they are tough to get out. I managed to avoid snagging any, and as I was watching my retrieval I caught the moving figure of the muskie and watched him hit and immediately set the hook and the fight was on. I was more than relieved when we got it into the boat due to the amount of structure. Again, Mepps landed me another nice fish. Thanks again Mepps!