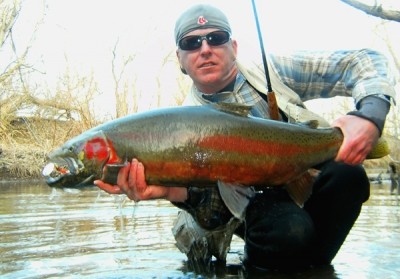 I saw this fish spawning on a redd with 3 other fish. As soon as I got close, 2 of the 3 fish spooked off. But this fish stayed. So, I took some casts and he was trying to bite, but, would only touch the spinner. Finally, I put the spinner right next to him 2 feet away and he turned to the side and nailed it. Soon as I set the hook I noticed he was a bigger fish. He took me upstream into two branches. I had a hard time pulling him out from under them. Once he got out, he ran super far downstream like a bullet! After a while, I finally got him in! This was one of my hardest fighting steelhead I've ever landed off the redds. Once I took the photo and got the hooks out, I noticed the fish was not doing good. It looked as if he was gonna die. I let him go to only find him on his side right away. So I tried to revive him for a long time. Sadly the fish died. I can't figure out why this fish died, he never was bleeding. I think he fought so hard that he ran out of energy or perhaps hit his head going under the branches. I've never had a fish die on me like this one did during the winter. Cold water temps will revive a steelhead fast. But this one, I can't explain??? Since it died, I weighed it. It was 14.4 pounds. Fun Mepps catch!