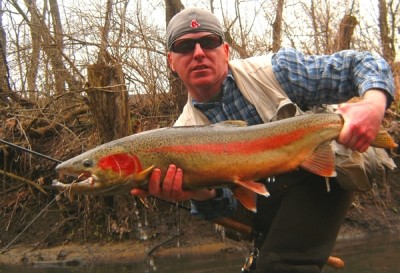 I saw a fish coming upstream. Once the fish got close to me, it went into a small fast water pool. Well when this happened, I noticed another fish that came out from some logs. This fish was fighting with the fish that just came in the pool, so I took a cast at the bigger fish and he was trying to bite right away but kept missing. I then decided to hold the spinner in the current and back drop the spinner off the fishes nose. I did this a few times, and finally saw him suck the spinner in. I set the hook hard and he went crazy almost taking me in the logs. I finally got him downstream and landed him. Fun Mepps catch!