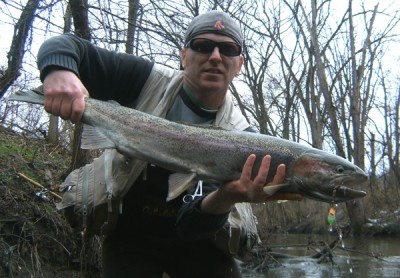 I saw this fish spawning with a male. I took a cast and the male tried to bite, but missed. Shortly after, I got a good cast in to where the spinner dropped right in front of the hen. As soon as it started to spin, BAM! She nailed my Mepps Good! I set the hook hard and she tried to run into the trees right next to her. After that she ran upstream and took me into some branches. I could not pull her out so I had to jump in the water and try to fight her out with holding the line in my hand. She did not want to come in, but, did not have enough energy to break my line. So she decides to run around me wrapping the line around my feet. Then, on top of that, when I tried to stop her from doing that the line sliced my finger. Finally I got her in and was able to release her.