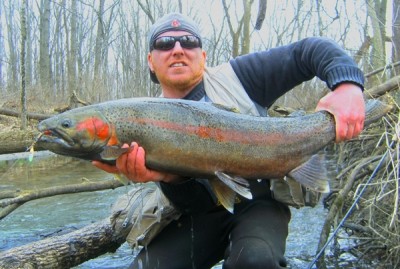 I saw this big buck spawning in front of a big log jam. I took a cast and he had the whole spinner in his mouth but I missed. I tried again. Same thing. Next cast he hit it and I set the hook at the perfect time and hooked him good. First thing in my mind was how am I gonna land him. I was literally in the middle of a ton of logs. This was a big fish. Lucky for me I kept his head near the surface causing him to shake a lot. Which helped tire him out. He did try to take a few runs under logs but I pulled him out. Finally I got the fish in. I hold him up for the camera and he slips out and then he decided to shoot to the logs downstream. He was stuck under a log but did not have strength to break my line. So I went in and got him out. Then he decides to shoot upstream under a few more logs. Got him out and finally he was ready. I held him up for attempt 2 of getting a photo and this is the photo you see. After that I took the hooks out. He released very nicely and took off like a bullet! This is a pretty big fish 15 plus perhaps would be my guess. I was lucky he was an old spawner or else I would of never landed him.