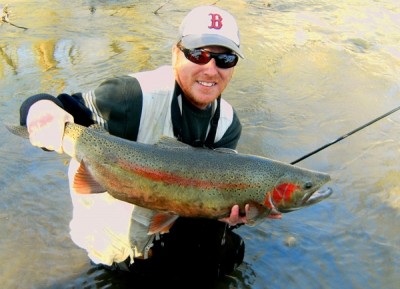 I saw this fish spawning with 4 other fish. He kept trying to bite many times but missed. He even tried to hit the spinner off the surface. After a while I kept holding the spinner in the current and he finally took the spinner good. I set the hook and he ran under some logs and kept going upstream. I set up my drag lighter, put the rod on the bank, found the line in the water, and fought the fish out with my hands and finally got him in. He had me wrapped in many branches. The fish swallowed my Mepps. But I was able to get the hooks out without hurting the fish. Good times!