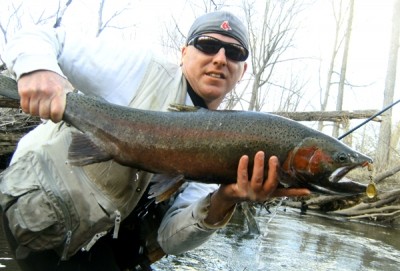 I saw some fish spawning in front of some logs with gravel. I took a cast and a nice buck kept trying to hit but missed. Shortly after he spooked upstream and more fish came out of these logs and would sit in the place of the buck that spooked off. Well I kept trying for the fish that would move on the gravel. But every fish kept spooking upstream. Must of been 5 or 6 fish. Finally the last fish to come out of the logs sits on the gravel and I took a cast and he nailed my Mepps!