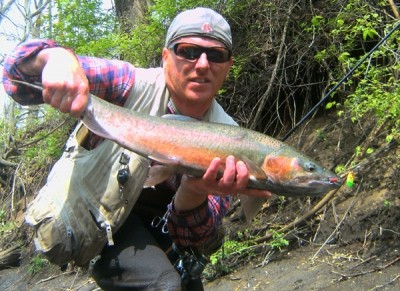 Well, the steelhead run around here has been over for a while. The last week of March there were only just a few pods left. This is very odd for around here. The run usually lasts until first week of May. With that being said, I knew if I wanted to catch an April Steelhead I'd have to really do some walking to find some leftovers. I got lucky and counted 6 fish in the whole stretch of water. This fish I saw sitting in a small pool. I took a few casts and had no luck. But I did not give up. I put my spinner in again holding the spinner in the current and I see a mouth open and try to bite my Mepps. Next cast, I did the same thing and he hit again. I set the hook a bit late. But got a perfect hookset. This fish put up a great fight. He took me right into a big log jam. As he was going under the logs, he spooked out 2 other fish. One of them ran all the way downstream. After going in and getting the line out, I was finally able to land this fish.