Trout Caught by Jeremy with Mepps Comet Mino in Washington 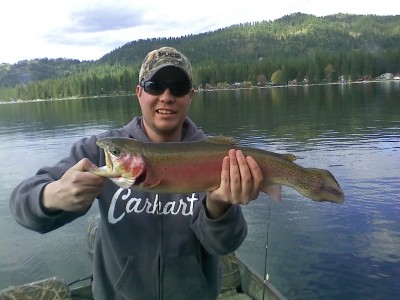 We were just finishing up a great afternoon of fishing when we decided to hit one more spot. My buddy was first in the water with his #3 platinum blue Aglia. That's when we spotted him following his lure. I said, "Big fish means big bait". So I grabbed my other pole that was rigged up with a #5 Comet Mino. He hit that thing as soon as it started spinning. After the longest 30 seconds of my life we got him in the net. What a beautiful fish. He was released to fight another day.