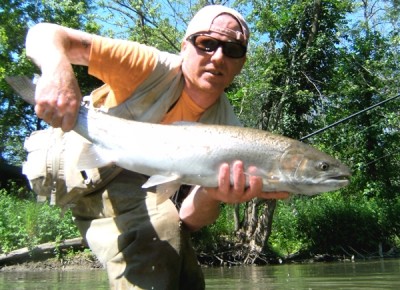 I was walking upstream to a hole that used to be pretty deep. But with the lack of rain and low water, I could see the bottom which was only a couple feet deep. I saw what looked to be a fish sitting in it. I was not 100% sure so I took a cast in front of it. As soon as my spinner buzzed past it, this fish went crazy and swam for it and swallowed my Mepps! I could not believe how aggressive this fish was. Sadly, I had to keep him since he was bleeding from eating the Mepps!