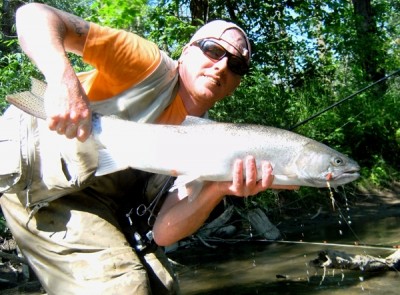 After I landed my first fish. I saw a fish jump just upstream from the spot I was at. I was standing just upstream of a log coming halfway across the water. I knew there were at least a couple fish in there. It was a small pool with fast water. I took a cast and I let my spinner swing next to the log and this huge 15 lbs. Steelhead came out and tried to bite. He put his lips on my spinner but missed it. Right after that it spooked him and he got out of there and went downstream. Right when he spooked he caused the other fish to spook upstream. So I get in the water and sneak upstream where the fish went. I took a cast and the fish spooked back downstream to the small fast water pool. This is what I wanted cause I knew this fish would not want to leave this pool again. I took a cast holding the spinner in the current and this fish slams my Mepps but missed it. I took a few more casts and nothing. So I decided to try my fly rod but had no luck. So I put my Mepps back in and after a few more casts this fish got mad and hit it but missed but I kept it in the pool. As I was about to take it back out of the water he came back and nailed my Mepps! Fish was mad and ran all over. But I got him in.