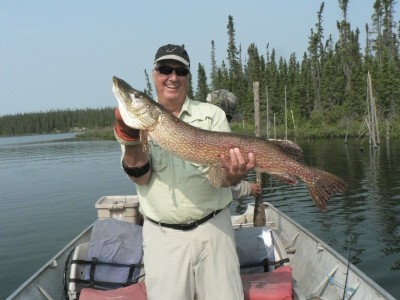 I caught this fish and a 42-incher on the first day we were at Lawrence Bay Lodge, and, eventually, caught 103 on this lure until I retired it after three and a half days. I then switched to the same color in a Musky Killer (hair removed) and got about 20 more northerns until the hook broke, but, the rest of the lure was okay. I have no idea how that happened, but, would welcome any ideas you might have. Anyway, I ended up with 159 northerns in 5 days and all were caught with your lures. I had several between 32" and 39". What a great place.