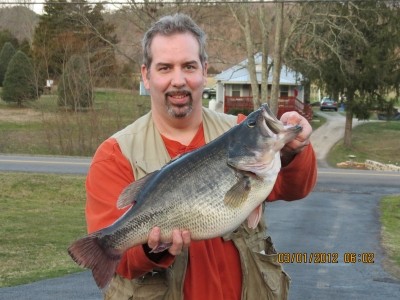 My Brother in law an I went to Douthate Lake in hopes the yellow perch were up or to catch some trout. The wind was howling and the water that is usually crystal clear was murky due to a big rain the night before. I was using my trout outfit with 4 lb Trilene line and a #2 Mepps Aglia spinner. On about the 4th cast, I got what I thought was a hang-up so I walked up the bank to where the spinner was, reeling the whole way in hopes of not loosing my spinner. When I got over where the spinner was, I put a little pressure on it to get it loose and all of a sudden it started out towards the middle of the lake. I loosened the drag so the fish wouldn't break my line and fought it for quite a while when it suddenly broke the surface and I saw it was a true trophy largemouth. I hollered for my brother in-law to come and help me land it since I had no net and very light line for such a fish. He came down and she broke the surface again and he got just as excited as I was at that point. After a lengthy battle, I was able to manoeuver her to the bank where my brother in-law was able to get her. We put her in a cooler and took her to get her weighed and then tried to put her back into the lake, but I guess with the lengthy battle and the stress of it all, I could not get her revived enough to take off. I had her mounted by Carsons Taxidermy from Madison Heights Va. and had a nice case to keep her in. She truly is a wonderful fish, and I was very fortunate, giving the weather, the light line, having no net, and having my brother in law there to help me to catch such a special fish.