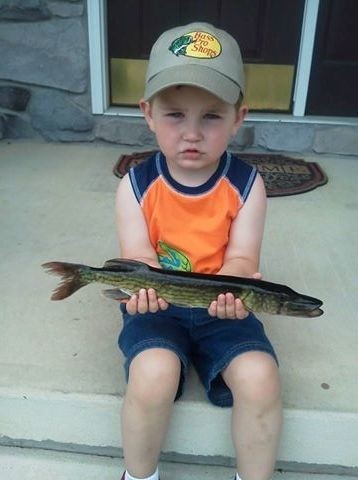 I took my son, Derek, fishing today in a small lake that borders a golf course shared by some homes in Fayetteville, PA. He had a Berkley light action Cherry rod and Zebco spincaster(under the rod reel 33 classic) with a Mepps copper #3 plain Aglia. (Derek had been practicing casting and reeling with a casting plug all winter long and had become proficient even at his age with constant interest in casting in the house and yard almost every day). So, Derek had made numerous casts even hooking up with a largemouth that leaped into the air throwing his spinner. Derek was persistant and continued to cast and retreive when we thought he became snagged, but, this was not the case as the fish began to bulldog down for most of the fight. Only when the quarry approached the bank did we realize he had caught a Yellow Chain Pickerel and landed it(with me helping get the fish onto the bank after he reeled it in). It measured 18 5/8 inches and was 2 Lbs. 3 oz. His face was priceless and was so overjoyed he no longer wanted to fish but get back home to show everyone! Certainly a nice 1st fish to start and remeber my son Derek's trek into the fishing world!