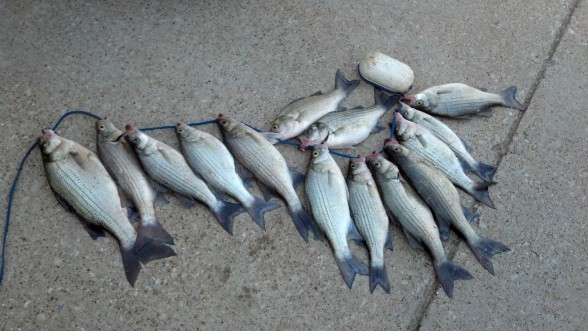 Lake Lewisville, Tx.
Windy lake Point, Lure #3 Aglia silver blade spinner-brass body-red tube on treble hook.
Early morning wade fishing Lake Point..walked out into water on lake point. The wind was blowing hard..Shad were jumping on the shore to get away from something. I began casting clockwise, to counter clock wise. I would cast my #3 Aglia into the shad being run to shore...cast out and let fall at a 5 count down. I began a steady retrieve back to me. Then- BAM!-A hard hitting white bass slammed my little Aglia. I reeled him in and placed the nice fish on my floating stringer. Cast again,and again,and again with the same results. I finished with 14 nice white bass in a two hour time frame. A lot of small 11" whites were catch and release this day as well. What a great little spinner Mepps has designed. If I do not have a Mepps #3 in my tackle bag from now on. I began to panic. So their is now at least two in my fishing arsenal at all times as my go-to lure first. I have also found this spinner works best with 4# line to 8# test mono-line.