Pickerel Caught by Sergey with Mepps Syclops in Russia 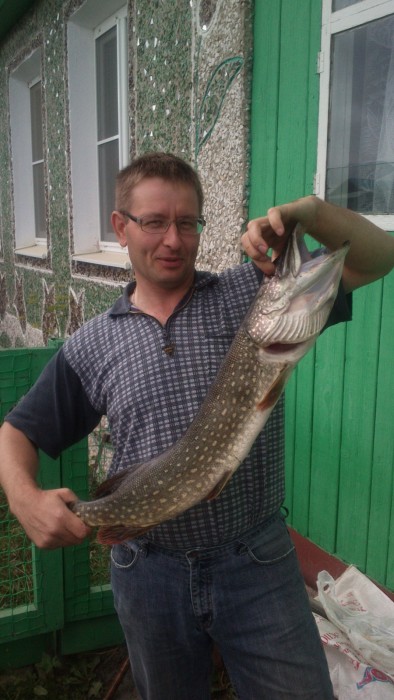 Caught the forecast is not the best day for fishing . Rainy morning with a east wind . Fished near the fermented islands of vegetation. No results Rybachy two o'clock , I heard a strong splash behind him . Turned waited and saw again cast for pike fry . Throw the lure exactly in place zhiruyuschey pike - No results ! Leave several times , moved to the left . No results as well . Disappointed sexes since half an hour in other places. Do not resist , back again, where previously chasing pike fry . Making casts offset two meters started fishing on the territory of this tricky pike between thickets of underwater vegetation . At the next casting fasten trolling bunch grass. Dragged this herb by pumping . Make a new throw slightly to the right , three turns coil and again seems to fasten a bunch of grass. Annoyed start to pump this " grass ." And suddenly the cord is firmly towards ....... fight begins . Pike jerk in the right to the left ... clutch rattle is cool ... but I do not force events to give pike wander and tired . When Pike was let down to three meters before me , and I was standing waist-deep in the water , she surfaced and assessing the situation dramatically dived between my legs . I did not lose too and let spinning followed between her legs. Soon as they turn around and pick up spinning , I see a meter away from a huge jump pike. This is ... a candle .... Heap spray tips of spinning breaks ...... I prayed .... God help ...... slowly am getting a little closer pike spinning one rises to the surface , grab her gills and elated ! Victory!