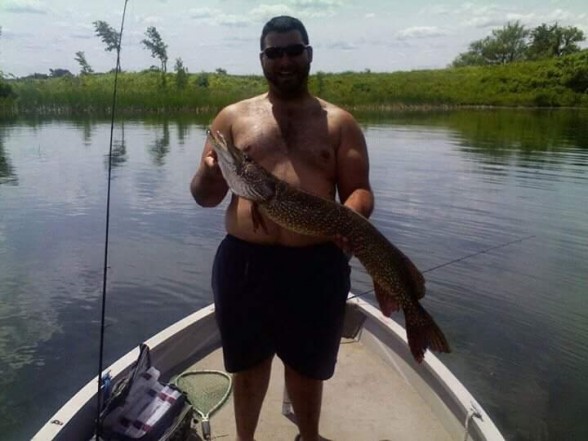 Crazy happening of events!!! The whole summer of 2015 looked Grimm, but, in a fanatic rush of emotion, a battle lasting nearly one-half hour would surely test my patience.....as a fisherman, sportsman and as a man! Never again I said, after losing what had to be a 55-65lb 6ft muskie. This northern pike was my redemption after the past few years of more spoils than spoils-of-war!! This Pike did everything to try to get away, but, my 14lb braided polystyrene line doesn't budge and neither did I. It all happened after a huge loss and most likely the state record for the St Regis River in Brasher. My brother was present the first day we brought in a muskie at 16 to fishing from his fishing boat at 28-29 yrs. He and I always had a gentleman's bet you say we had, but plain and simple, we sport fish and fish to eat! But, we are super competitive and it's the same thing over and over. He puts all the money in for our adventures, I catch the fish to pay him and his boat back, but that boy deserves his shot!! He had his shot but doesn't think nothing has bitten all summer so the chances of it now?! Too good!! Out of nowhere he like " holy shit that's a monster pike" and with a flick of his jig at the pike l, in four feet of water....lunged at his bait with such furiousity!!! The pike had cut his braided line like it was nothing, which shows on my part...ignorance is bliss!! He lost and just as we got over what just happened, my line was tight as a snare and cutting through the water. It actually makes a noise that says, big, fast, powerful....like the runs it made and 22lbs isn't anything to write to ma about, but, the pressure of the catch and a summer with only a good chase!! It was over 10,000 casts easy and every perfect day on the fish calendar was a bust and it's always when you lose focus, that a monster sends you into shear panic!!! I hate that sudden panic, but live for it and to find more times I'm going OMG, OMG while fumbling with the drag, like I have seen jaws in Brasher Falls, NY. I'm sure the campers heard a screaming reel about to be spooled and/or they are curious what monster I have on because most of the campers didn't realize fish like that were in small rivers. Won't just dive into the St Regis anyone will ya?! I sure as hell won't bc the monsters I've seen, would open your femmeral artery after half your leg is in its stomach LOL. It's crazy how many four-foot plus muskies I seen sun bathing within two feet from shore. Probably waiting for a deer like a stealthy alligator and how their not scared of a screaming girly man when they chase a lure within a couple feet of beaching itself in your lap, haha! But, my point is I shouldn't have landed this Pike at all! Blows my mind, but when you have your brother, a fishing partner you've had your whole life....it's a game changer! Oh, and some random guy with a giant muskie net lol.