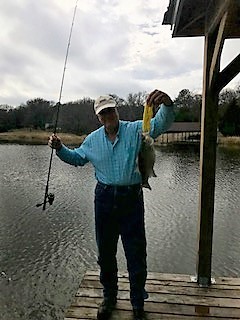 Oh! What a few days! A local angler well known to Mepps, Dennis Christian, had written about his technique using Mepps Plain Aglias, #2s up to #4s, as I recall. He is a respected contributor on the Texas Fishing Forum, has at least one article on the Mepps website, too. I tied a #2 on and ended up with approximately 40 white bass over 3 days of fishing this past weekend, likely around 4 or 5 hours total time spread out over these days. In addition to the white bass, I also caught 4 black bass and one large crappie. Owing to a peculiarity of Lake Athens, we have quality white bass (big!) over big quantities (no river feeds for them to go up to spawn). So, they moved up into the cove I live on where tunneling winds create a condition that they like. Size? I had one around 19" and likely 5 over 3 lbs. I had none that weren't 14" or so in length. The females were all in a highly gravid state ready to drop eggs. It was so much fun! Tackle: Spinning gear with 10 lbs. Sufix 832 braid to an 8 lbs. Invizx leader. I likely would have used some #3s or #4s but I was out of stock so all of these were caught on #2s. #3s and #4s would have allowed longer casts and I certainly would have reached more fish I think. Brad Reid