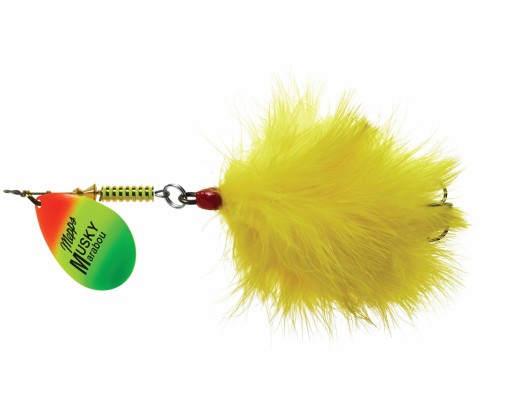 Other features include a heavy-duty split ring for easy marabou tail change. The split ring also eliminates the leverage a big fish can exert on straight-wire musky lures.

All tails are hand-tied with the highest grade of marabou feathers for outstanding durability and lifelike movement. Mepps time-tested tandem hook assembly incorporates heavy-duty extra sharp treble hooks. The Musky Marabou, with its easy-spin low-drag blade, can easily be cast all day long. In addition, its drag-resistant high-flow marabou tail gives the Mepps Musky Marabou more lift and lifelike movement. Retrieve it at a medium to high speed, bulged just under the surface or burned over the top of weeds. 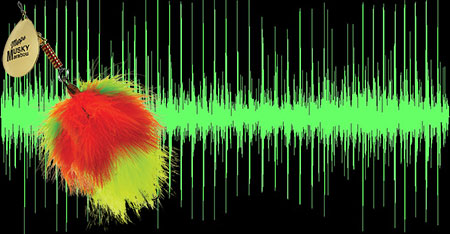 The #7 Colorado blade on the Musky Marabou produces a hard audible "thump" as it's pulled though the water. In addition, this Colorado blade produces a pitch higher than any other blade we tested in its size-class. This is understandable, considering the Colorado blade spins further out from the body of the spinner than any other blade Mepps uses. Also this blade weighs 8.5 grams. making it just a little lighter than either the #7 Aglia blade used on the Mepps Magnum Musky Killer, or the #6 Aglia Long blade on the Mepps Giant Killer. Both these blades weigh 10 grams. Because the Colorado blade is slightly lighter and it spins out and away from the Musky Marabou's body, this lure can be retrieved at a medium to high speed, bulged just under the surface or burned over the top of weeds. It's no wonder the Musky Marabou, with its pulsating marabou tail, is a favorite of trophy bass, pike and musky fishermen worldwide.

I have used many inline spinners and was going to start building my own because most musky spinners use a regular skirt or tinsel, I decided to try the Mepps Musky Marabou in Hot Firetiger(orange yellow and green.) Much to my surprise musky wasn't the only fish we caught with it, we caught plenty of pike on it also, but the biggest surprise was when I caught 4 largemouth in 4 consecutive casts and the smallest was 3-1/2 pounds and the largest was just over 6lb; for Illinois waters that is a rare fish on a bait for musky!!! After that day, I set my mind not to buy all the components to make my own cause the Musky Marabou is what I would use as a template, maybe when I get some free time I may build some, but for now my 16 Musky m
Marabous I bought have been doing the trick. I would recommend the bait to people but the downside is the Marabou loses the colors relatively quickly and after a number of fish the Marabou comes undone. I wish they would sell a Musky Marabou with a quick connect so you could change marabou colors, like a gold blade with one all black and another tail section with all red or red and black. I wish they would sell just the marabou pieces by themselves, out of my 16 baits only 7 are still in good condition, the others are so worn there isn't enough marabou to even cover the 2 treble hooks or the marabou is so faded you almost can't tell the colors cause they're so faded. Make a Musky Marabou with a way to change the marabou and with a clevis to be able to switch blades and it would be the perfect lure, swap blades and colors quickly, charge a little more and put a different color blade and tail with each lure as most of us musky guys would buy them all up from you!! Thanks for a great lure and hopefully you take some of my advice and I will never build my own if I can buy a reasonably priced perfect bait

Never been a big fan of bucktails as they have never produced as well as some other baits. I had to try a Musky Marabou 'cause of how fluffy it looked in the package. I bought one to try and now I have basically every Musky Marabou Mepps makes. I like to troll over the weeds with the Marabou and have caught a ton of largemouth over 5lbs???? Who would have thought largemouth would attack the Musky Marabou, but, they do; and, there all monster bass no small guys with this lure. it also has caught me more northern than I can count, the largest being 45-inches, and we have only got a couple of smaller 35 or so inch musky, go figure the Musky Marabou has caught me some of my biggest bass and pike and only a couple of smaller musky. Once the big musky start to come a little shallow late in the season, I'm sure that will change! Thanks Mepps, but I think you need to re-name the Musky Marabou to the predator Marabou 'cause it catches all the predators.

The Mepps Musky Marabou is one of the most productive lures day-in and day-out in my boat. As a full-time musky guide, I need lures in my arsenal that I can count on to produce fish, even under the most adverse of circumstances - the Musky Marabou does just that! While the bait works well from opener through fall, it really seems to be at it's peak during the summer months when worked on a medium to fast retrieve - use a quick crank of the reel handle several times during the retireve to get the marabou to really pulsate, and hang on as a monster pike or musky hammers it!

Hello, Jim, Michael and the entire Mepps sales and distro team. I want to thank you for providing excellent yearly press releases combined with monthly newsletters. These efforts are what is the patient and appreciated job related duties and work related criteria all industry companies should be following and executing. The lack of these efforts by other industry manufacturers and distro/media companies are the main reason why the industry is in an economic downward spiral and the excuse of the nationwide economic downturn is not the scapegoat most are using.The entire Mepps Team's enthusiasm and support for anglers, sporting goods and most of all each other relate in the catches and consistant intrest many anglers still have when it comes to catching fish in both fresh and saltwater fisheries. I am proud to say that the Marabou and large Tiger Musky Marabous acquired years back were field tested in the lower branch channel of the Delaware River by a selected and historic fishing and Gun Club member known as Lenny Rychychowski. This club is dated back into the 1800's and Lenny's proficiency in angling is exceptional. The sad thing here in New Jersey is water polution, clarity and most of all the unlikely sportsmanlike fish care and fishing pressure which has been adding to a shortage in population of many species of fish. Limits and on most adventures and guides any catches are far and in between....however, the Tiger Musky Marabou and the Large sized Marabous combined with most any spinners from Mepps Gallery of a wide variety of glossy, gleaming and feathered trimmed lures which I call Chicken lures...well...Lenny caught many a Striped Bass and a heck of alot of limits of Bass and many species of panfish including perch and bowfin on a wide array of great Aglia lures from Mepps.
May I demand all other industry leaders to follow the plans of media and angler relations in which Jim and Michael follow as their passion and love of the sport coinciding with their well versed knowledge in fishing is nothing less and nothing more than good news and views for a great sense of the future for both, anglers and the forecast of Growth in Sales for stocked shelves of fantastic and productive lures. The Tradition lives on and it's a wonderful thing here at Mepps and in the USA as we are still able to see employees execute criteria which is necessary for success in both growth in catches and sales!
Lenny and I have traveled and fished extensivley for well over 43 years and national catches can be related to mostly the spirit in using Mepps products! Thanks so much again for a "JOB WELL DONE!"

PS:The Grab Bags are like taking the loot without a gun! Oddles of top of the line, up-to-date lures made with quality materials which are not degrading and falling apart as in comparison to other more expensive swimbaits and so called new and innovative lures like the Optimum Swimbaits I have field tested and watched deteriorate right before my eyes. Why pay more money for untested and testimonialed products when for a value, keep a consistant tradition alive and by Mepps Products! Don't forget...send those Squirriel tails in for the Squirriel programs are important for making quality lures backed by quality people combined with allowing hunters and anglers to make a fare market value in revenue with their bagged catches!

Keep up the Great Job and anyone who feels as though their Pro...GO MEPPS and you are a part of Tradition...Go Mepps...Go Pro!
BarryTheBassESPN

I have only been into musky fishing for a couple of years and this lure was the best one I have used to date. I started musky fishing at 10 years old and always look forward to opening morning. I caught my first musky on a yellow, green and orange tail(Firetiger). This fish measured 39" and is still one of the biggest fish I have ever caught.

I've been fishing for musky on a lake known for big fish since I was 13. I am now 33 and just caught my first musky. I tried all other bucktails and lures with no result. I just recently got a Mepps Musky Marabou and suddenly I had A 50 inch monster boat side . Despite the power of a 50 inch musky on a summer day, I found the lures were durable and continued to use it the rest of the day without even any adjustment. Another thing I liked about the lure was it was easily removed from the fish allowing her to fight another day. That was the best day fishing yet!

In one day me and my dad both had success catching Muskys on this bucktail. My dad caught the first on a white one with a silver blade and weighed in at 8lbs. About 45 minute,later I caught one using a black with a gold blade that weighed in at15lbs. I would highly recommend this lure to anyone wanting to catch a trophy Musky, and I have caught many Northern Pike on it as well.

I have used Mepps spinners since I was a child. In the last 20 years I have been Musky fishing but have drifted away from the Mepps line and used other spinners. This past August, I came back to the Mepps line in a BIG way! On our annual fishing expedition to Canada, my partner gave me one of his Mepps Musky Marabou spinners to try. I boated 3 Muskies that day! A 50+ incher, a 35 and 46incher on the Musky Marabou spinner. In fact, the largest musky bent the spinner 90 degrees between the upper and lower treble hooks and was still hooked good all the way into the net!
Quite a day for me and my biggest fish to date. I also wanted to mention the easy spinning blade and ease of retrieval. This easily beats a hair "bucktail" casting into the wind, and we had some 30 knot winds at times. You can work this all day and not be as tired. Good Musky hunting!