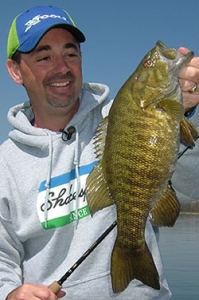 There are few lures I used as a child that still remain in my tackle assortment. Those few are there because they continue to catch fish. Everything now is so high tech with the hottest colors, realistic images and enticing smells. We have lures that give off scent, we have lures that have scent in them. Lures that give off sound waves and lures that even have mean looking expressions on their face. I saw a group of lures lately that have coffee in them. Do you think small mouth bass like decaf? Anyway, with all the fancy, hi-tech and silly stuff that's out there, there are still a group of lures that has been around for a long time and without much fanfare, continues to be one of the most productive lures to catch just about anything that swims. The list of fish that I have caught on in-line spinners is longer than just about any other list I have. Matter of fact the two most productive lures I have ever used for a variety of fish is either a lead head jig of some type and a Mepps spinner. 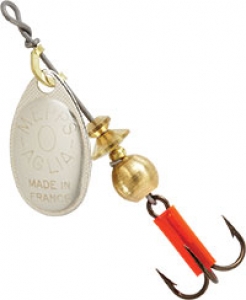 Now some tournament fishermen are going to think back to their youth and remember just how effective those old spinners were. Some won't use them because their not flashy, and they have the "Kids use those" mentality, and that's fine. For the rest of us, myself included, it's about tools that effectively and consistently catch fish. From Arctic Grayling to Walleye and every fish in between let's look at the fish appeal of these lures and what they have to offer us as fisherman.

I have thrown a lot of in-line spinners over the years and to a point, they have all worked in one capacity or another. However, none have out fished or out lasted the durability and catch-ability of Mepps. I have a deep affection for traveling and fishing in Canada. It started as a child and it has continued and increased with every passing year. For as long as I can remember I have called Mepps, the American Express Card of lures, I never leave for Canada without them! As a young child fishing for small mouth bass in Lake of the Woods I vividly remember (check out this set up) using my Shakespeare Ugly Stick with the old Sigma reel and line attached to a gold swivel. 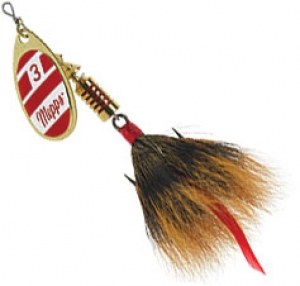 Clipped on to that was a #3 Mepps red-white Aglia. Large amounts of 2-4 pound small mouth bass fell prey to that set up. When the may fly hatch was on, that #3 with a brown squirrel tail as the sun was setting, was deadly! I have no idea how many small pike had that lure for lunch, but it made for one happy kid!. I think it eventually ended up swimming away with one of those pike. With all the fish I caught on that lure, I never lost it, the fish took it away!

While on different trips to Canada, I have had the opportunity to fish for artic grayling. Back home in the states, when I get the chance I love to fish for the stocked trout that the state provides at one of the lakes near my house. Spinners like the Ultra Lite Aglia and my favorite, the XD Dressed work extremely well in both countries. While filming a show for Midwest 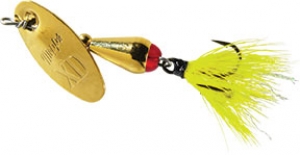 Outdoors several years ago in Saskatchewan, we encountered some grayling in a deep and fast moving part of a river we were exploring. The water was so clear you could see the grayling easily taking the bugs off the surface while the bigger ones stayed deep feeding on smaller prey. I fished the XD (extra deep) on six pound fluorocarbon line on a 6'0 light action spinning rod.The same set up I use back home for the stocked rainbows. The combination of the sinking line and the heavier miniature lure aloud me the opportunity and ability to present a lure to the deeper and bigger graying and several 20" fish were the result.

To see a big grayling inhale your spinner, and have that dorsal fin spread out and catch the light on a sunny day is a vivid and lasting memory. The pink, sliver and blue colors radiate from the fish as it streaks through the water. An impressive fighter for is size, it rivals the smallmouth bass in tenacity and is an awesome fish to pursue if you get the  chance.  Stocked rainbows will crush a #00 Ultra Lite Aglia. Try one of those with the single hook. The hook ups are impressive and the release due to the single hook is much easier. Those trout are tasty on the grill and the 00 with a white dressed single hook will help you out with dinner!

Lake Trout are without question one of my favorite fish to catch. It does not matter if I am fishing for them in Canada or on the waters of Lake Michigan, they are one mean and tough fish. I think it was back in 2005 when I had the chance to fish for spawning trout in the fall. Fishing a reef off a river system in Saskatchewan our group could see a lot of the trout we were fishing for. The Lakers get shallow where you can cast to them. It's very common to hook one and 4 or 5 more follow the fish to the boat. It's a thrilling experience that can be increased with the right tackle set up. Due to the lack of wind and the extremely clear water, we had to back off the reefs and used spinning tackle with ten pound FireLine to cast our lures. I used a #5 sliver Mepps Aglia (plain) to cast the far distance I needed to reach those weary trout. The #5 weights a 1/2 ounce and on spinning tackle can be cast a "country mile". It's an easy lure to "wake" near the surface or count down to deeper fish. Needless to say on that sunny day, the Lakers crushed that lure!

Last fall, I had an incredible time fishing for white and hybrid bass on Lake Bloomington here in central Illinois. We caught them on a variety of lures and the fishing at times, was fast and furious. Once on the lake, and you can see it on a map as well, there are two rivers that come together near the middle section of this reservoir. The whites and hybrids can really school up there at certain times as they herd the baitfish to the surface. The feeding frenzy sounds like machinery of some sort and is probably the closest thing to salt water fishing that you will see in the Midwest. It's an incredible site, however, in most cases the feeding does not last long so quick and far cast are what is needed to catch these fish. A #4 or #5 Mepps can be used in this situation with either a sliver blade on sunny days or a hot Chartreuse blade on the cloudy days. I clip off the barbs on the single treble hook for quick release of these fish and a rapid cast back to the next one. Fishing barbless is great in this situation and as long as you keep tension on the fish, you'll land him. 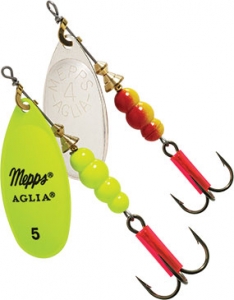 I have said before and continue to believe that there are no magic lures. There are some that work better in more situations and for more types of fish than others. There are even fewer lures than can last the test of time and still be successful. 70 years of fish-catching history is already behind the Mepps lure company. I have a lot of great memories than accompany that lure on every cast I make with one. A simple yet extremely effective lure that continually disappears from shelves of numerous sporting goods stores across the country. I restock certain ones each year because some are just to beat up to use. They still work, but I have several I have had to retire just because I don't want another fish taking them away. A couple #5's have hung in my office and I view them with a smile and memory every time I look at them. To see them hanging there is a constant reminder to me of the multispecies effectiveness of in-line spinners. 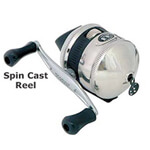 Choosing Monofilament for your Mepps Fishing 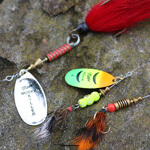 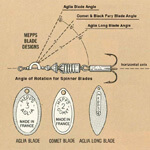