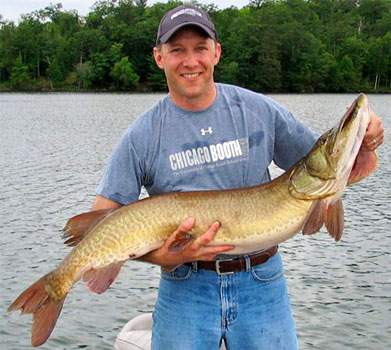 There was a certain amount of ritual associated with the occasions when my father would remove his Mepps from the tackle box. He would tell me, "Judd, it's time for the secret weapon. It's time for the Musky Killer." The ritual continued as he opened the clasp on the leader to receive the Mepps, and he would proceed to discuss how the muskies feared him and his deadly Mepps-- it was really as if he were addressing the Mepps and not me; almost as if the Mepps itself needed to be instilled with the confidence that my father had in it. And then, on the first cast, and sometimes the first five or six casts, when the bucktail and blade would hit the water, my father would exclaim, "Whammo!" -- as if to say, "here it comes muskies, just try and abate your desire!"

Dad was on my mind on the morning of July 14, 2009, when my guide Barry Klatt handed me a Mepps Marabou, and suggested we "get their attention." Barry, a guide well known in the North Woods of Wisconsin had become a close friend of my family over the past several years. Fishing with Barry isn't so much like going out with a guide as much as it is fishing with an old friend. Barry and I had been throwing an assortment of crank and jerk baits for the previous two hours, and had been rewarded with nothing more than a follower and a medium sized Northern Pike. I fitted the Marabou and closed the clasp on the leader. When the heft of the lure slapped the water on that first cast, I could hear my dad's voice in my head, "Whammo!"

As we drifted over a patch of cabbage seaweed, I continued to throw the lure downwind from the port side of the boat with long, easy casts. After 10 minutes or so, just a second after the lure had hit the water on what was probably my seventh cast with the Mepps, and right after I'd begun my retrieve, the lure was hit by what felt like a Mack truck carrying a great and seemingly immobile weight. I could see a huge swirl emerge on the surface where the Mepps had entered the water. I caught sight of a large caudal fin stirring the water with forceful strokes. From the look of the back of the beast that rose to the surface, there was no mistaking that I had a monster on the line. In that split second, I did my best to set the hook on this enormous weight. Barry asked, "gotta' fish?" Yeah. "How big?" BIG! Get the net! The fish gave fight for what seemed an eternity as Barry ran around preparing the boat for her arrival. When finally she came into sight, Barry exclaimed, "Holy cow! She's fifty inches!"

The fish, sensing the gravity of her situation, dove under the boat and headed for the opposite side. Very carefully, I walked the line around the stern and the prop-- which Barry had raised in his expert anticipation of what was to come-- only to head back once more to the port side of the boat. After fighting the fish for a few minutes longer, trying to get her pointed toward the bow of the boat, I finally had her headed nicely into Barry's waiting net. With the fish's flailing and writhing--power capable only of such a beast-- Barry brought the musky into the boat and laid her on the deck. Barry was giddy with excitement and his hands were visibly trembling as he quickly went to work to free the lure from the musky's mouth. He kept on shouting, "BIG fish, oh my gosh it's a BIG fish!" I believe there were other expletives shouted by both of us, but this will be the version I share with my kids.

Barry quickly measured her in at 51 1/2 inches and then handed her to me to pose for a very quick photo. With that done, we scrambled to get her back into the water. With as much care as could be managed, I passed the fish to Barry and he slid her back into the lake. With both of us leaning over the edge of the boat, Barry passed her tail to me so that I could begin to gently rock her forward and back, allowing the oxygen rich water to fill her gills and restore her strength. As I performed what might be described as CPR for fish, Barry snapped a few more pictures of her and was able to capture the impressive breadth of her back.

I could feel the musky's strength returning as her muscular tail began to move with precision back and forth, letting me know that she was ready to go. I released her and Barry and I watched in awe as she swam slowly away only a few feet from the boat. And then, almost in defiance, she dove with an incredible display of force back to the cold depths of the lake. 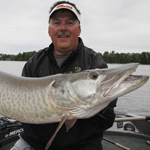 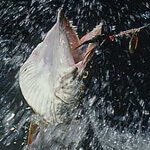 Putting the Marabou to Work for More Muskies 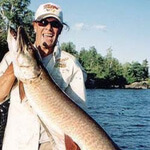