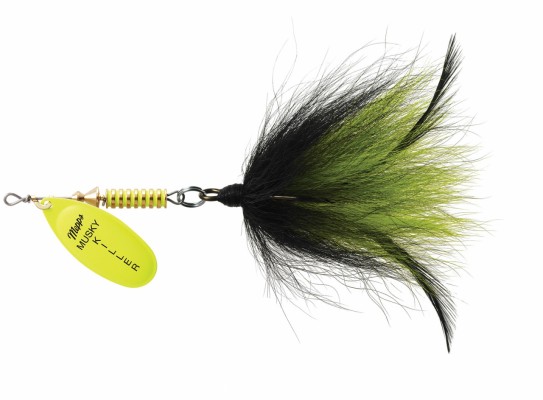 Musky season opens early on many shallow northern musky lakes, and fishing these cold waters can be the key to early season action. A slow presentation is needed, and the Musky Killer's blade, like the blade on all Mepps spinners, begins spinning at even the slowest retrieve. Fish shallow bays and large flats of weeds early in the season with a Mepps Musky Killer.

The Mepps Tandem Musky Killer features a extra heavy-duty super sharp premium 5/0 hook and heavy-duty 3/0 trailer hook. This is the perfect lure for trophy musky and monster northern pike when a larger profile lure is needed to match the size of the the forage.

When fishing warm water, use a high speed retrieve to “burn” a Tandem Musky Killer just under the surface. The added bucktail helps create more movement and size “bulge,” while the double hook configuration generates better hooking percentages and catches those short biters.

All Tandem Musky Killers also feature a 1/2-ounce brass weight. With this added weight they can run as deep as eight feet. This makes the Tandem Musky Killer an excellent spinner for fishing weed lines bordering deep water... the mid-summer haunts of big muskies.

For years, the #5 French blade was the largest blade in the Mepps Aglia series. Today, the Mepps Magnum Musky Killer features a #7 Aglia blade. Listening to these two blades under water is like watching a defensive lineman running along side of an offensive lineman. The sound of the #5 Aglia blade is steady and deep with a rapid repetitive thump. The Magnum Musky Killer blade sounds similar, but, the thump is deeper and slower. Both sound like a slow moving locomotive, and both are very easy to hear underwater.

My name is Travis. I'm 15 and have been hunting and fishing all my life. I've only been musky fishing now for 2 years, and never had any luck. However, the first time I used a Mepps Musky Killer, I caught a 42 inch musky. The same summer, I caught a 52 inch, 40 pound musky. I never had any luck using Mepps. After I switched, I caught 2 muskies, one giant, once in a lifetime fish, at 15. I will tell you, I will never use anything else. Thank you, Mepps!!!

I have never done much fishing until recently. My friend bought and gave me this Musky Killer. I gave it a shot and what did I catch? A 45 inch Musky! I'm a firm believer. Since then I've caught 2 more Musky with the same Mepps lure!

I'm a 14 year old from PA. I love musky fishing. The first musky lure I ever bought was a Mepps Musky Killer. I've caught a 42 inch musky and a monstrous once in a lifetime 52 and a half inch musky. In both situations, different spinners were presented to the muskies before I threw the Mepps. Now Mepps is a go too spinner for muskies!

Hi! I LOVE fishing, but, I have not fished in years (married-husband doesn't like to fish!) I ALWAYS wanted to catch a Musky. We were invited to my in-laws house on Lake Chataqua-NY. So, I went to Dick's Sporting Goods where I picked out my lures,------thought and said to the men helping me,"Musky Killer, its pretty and looks like a fur coat on the end!" They laughed and said it was funny how I was picking out my lures by look. Anyway, we got to the lake and I started with a pretty silver lure. After a while when that didn't get any attention, I reeled it in and said, " Ok that's it, time to break out the "Musky Killer". After 2 try's-the Musky hit on the third! I thought that I had snagged some seaweed but felt a pull to the right and something large on my line. When I saw the Musky as I was reeling it in closer to the boat I said, " I think I caught a Musky!" Everyone on the boat didn't believe me until they saw it! The Musky I caught and released was 32inches. My Dad loved fishing, flying, and golf. He would always show-off the Musky he caught at Lake Chataqua when he was younger. When he was dying from cancer, I told him I would get a hole in one or try to catch a Musky for him. Well, 1st I thank you God! I also want to thank Mepps for making pretty lures that work! Thank you also to my in-laws and Family for use of their boat, and especially my father-in-law, Gordy, who was our fishing guide that day, and took the hook out of the Musky's mouth for me!

It brings a tear to my eye every time I think about this lure. The white blade and white tail Musky Killer has produced more fish for me than any other lure. I caught a 49 inch muskie last summer with this lure and countless northern and smaller muskie. It is a feeding frenzy every time it is thrown in the water. You can run it as shallow as you want and even have the blade create a wake on the surface. Perfect for shallow casting over weeds for monster fish. If you throw this lure you will not be disappointed. Great job on the lure, Mepps.

Using an old, beat-up, Musky Killer I caught a 39" northern pike breaking my old record (27"). Thank you for the time and effort put into your lures.

Went to Canada one year with a group of guys that had been going there for years. I didn't have probably the best equipment as I didn't know what I was getting into, but I did bring with me a handful of Mepps Musky Killers in number 5 single hook. I took a little abuse from the guys as they all had a lot better equipement and bigger stuff. By the end of the week I had boated a lot of the big fish. Mepps is my absolute pick, I love throwing the Tandems in the Musky Killers. Thanks for making such a good product and thanks for making my Canada trip one to remember. Did I mention I could carry all five in a small zip lock bag. Thanks, Steve

Where I normally fish is 2 to 5 feet deep with a slow current and a ton of logs and submerged debris. Last summer I decided to try a Mepps Musky Killer in the river. I was at first afraid that I would get a ton of snags with a heavy spinner. The Mepps Musky Killer worked SUPER! I could keep it running just under the surface. One afternoon my friend and I caught 11 pike on Musky Killers. Most over 30 inches (which are very nice for Ohio). I also caught a 36 inch pike and bunch of others this summer. Check them out in the Photo Section on this web site or see the video I posted on the Mepps Facebook page. CHOMP!!!!!

If I had one lure to use to catch a big Musky, I would choose the Mepps Musky Killer with gold blade and yellow- enough said!