Musky Caught by Galen with Mepps Giant Killer in Minnesota 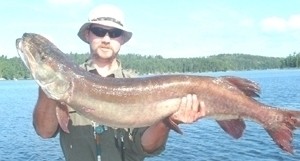 This was the first fish caught on our June trip to Minaki Ontario. It was caught on our second or third cast. When we arrived at the Marina earlier that morning, we asked the owner for some local advice, "where was the best place to catch musky?" Without any hesitation he replied Tongen Bay. Now you really won't believe this. Our cast in Tongen Bay actually went a little long and landed right on what we now know was Dick Tongens dock, after about two minutes of jerking and tugging, and laughing we heard the infamous voice, "there's no fish here" quite a frightening sound coming from the house whose dock your lure is stuck upon. We exchanged our appologies as this giant of a man came down to the dock to examine the distrubance. He unhooked the lure and told us to go fish somewhere else as he tossed the lure over the side of his dock, at that moment this giant fish struck the lure, and the rest is history as we say. We were actually invited into Dick's house for appetizers and cocktails after the affair and none of us could stop talking about our catch. All in all this female was 53 inches and weighed approximately 35-40 lbs based on its girth measurements.