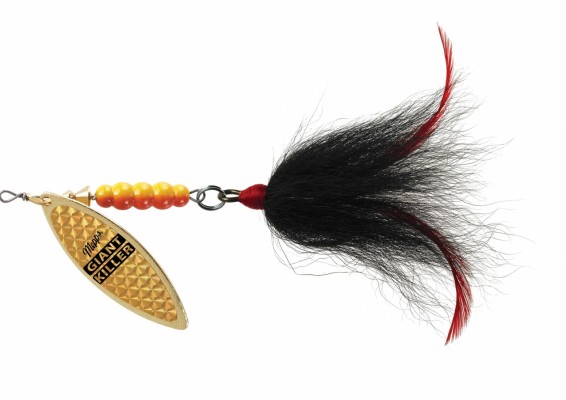 The Mepps Giant Killer is an extremely versatile big-game lure that is effective in both fresh and saltwater. Bucktail and tandem bucktail Giant Killers, as well as the Giant Killer Mino are top producers of musky and northern pike. They also will catch striped bass and other saltwater predators. Plain Giant Killers are perfect for trophy king salmon.

This classic Mepps has always been a great producer of large fish because it’s so well suited for water depths of four to 12 feet. Big musky and trophy northern pike are found in these depths all summer long.

Caught the second musky of the summer and my life with the Giant Killer, used it for the first time today and brought in 7 northern pike and a 38 inch Musky!

First cast with this and I pulled in a 19 inch and approximately 7-7.5 largemouth, I have never had a largemouth fight so hard, was pretty sure it had to be a pike but to my surprise it was a giant bass

I caught several big silvers with an orange Giant Killer over Labor Day Weekend. My wife and father used several other lures with minimal success, but the Giant Killer produced fish after fish.

This lure is great for lakers... just troll slowly acrosse the lake and bam you slam one. The pike love it... and you will catch trophy pickerel with this lure.

I am not a good fisherman, but using these Mepps lures I have caught many cockroaches (northern pike). I caught so many yetserday I lost count. I also out fished everyone on the boat..Which makes me feel bad because I am the only one having fun. If you like roaches you'll love the Mepps #5!

I been fishing for musky's on and off for about a year now. I recently used your Mepps Giant Killer Bucktail for the first time and boated my first two muskies. First one was a 38 inch from the Chenago River and second was a 41 inch from the Susquahana River, both within about a week of each other. Your lure enabled me to catch the "1 in a 1000 cast fish" faster then I ever thought possible. Your lures will be always be a part of my fishing tackle when heading out to "Hunt for Musky". Thanks for making a Great Product.