Grayling Caught by Dennis with Mepps Trophy Series in Alaska 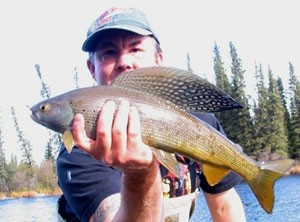 I was fishing for late run Coho Salmon at the Clearwater River. I was casting #5 Trophy Mepps Spinners. I began a slow retrieve when I felt a hit and set the hook, thinking it was a small coho I caught, I began to reel. When the fish got closer, I realized it was not a coho but the biggest Arctic Grayling I ever hooked into...I still can not believe how its mouth got around the #5 lure treble hook. I measured the brute at 19 inches and released him after a self taken photo with my auto camera. I submitted this grayling photo to Alaska Fish & Game and received a Trophy Catch & Release certificate and patch from the State of Alaska. This was my biggest ever grayling...Thanks Mepps!!