Musky Caught by Darren with Mepps Musky Marabou in Wisconsin 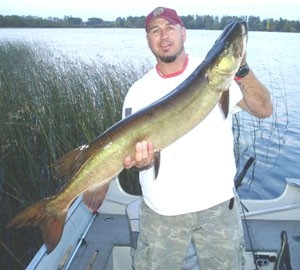 I am submitting this for my cousin and best friend, Darren, who is in Iraq as we speak. He caught this fish while we were celebrating his going away party. We had a dinner bet for the biggest fish caught, with guys in another boat, and we spent most of the afternoon throwing an assortment of different lures with no luck. It was getting dark and we pulled into a bay close to our cabin and Darren put on what he considers his favorite lure for that lake. He's caught a handful of 40+ inch muskies on this lure. On his first cast, we saw a tail following the lure on retrieval. All of a sudden he pulled up his rod to set the hook and yelled "fish on". After fighting it for 5-10 minutes we were finally able to net it and get it in the boat. After measuring it and taking this picture, we let it go back in the lake. We, then, got on the 2-way and alerted the other boat that they'd better make sure they had enough money for dinner. After a couple of high-fives, we headed to the restaurant nearby for one of the best "free" dinners we've had. Darren will be back in October and I can't wait to get back up to our shared cabin to try to hook onto another big one like this. In the meantime, I may steal his lure and get some use out of it.