Musky Caught by Victoria with Mepps Musky Killer in Minnesota 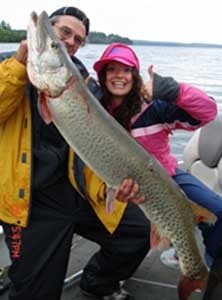 First time going to fish for northern. Never caught one before. My husband kept telling me hold my rod tight over and over again they don't hit like bass. Yeah Yeah Yeah. Whatever he kept telling me oh yeah they will be two feet maybe three. Ok cool. Well, the first day we get there we go out for half a day. It's overcast and raining on and off. Within the first hour nobody caught anything. Me and my husband are in one boat and two other boats in our party. My husband is tying a lure on. I'm fishing when this thing comes out of the depth and opens his mouth and grabs my lure. I screamed at the top of my lungs. I got one! I got one! Im crying my eyes out. My husband did not see it. It comes back up and he sees it. He starts yelling at the other party... "we don't have a big enough net." I fought this thing for a half hour. My arms were tired. I only had twelve pound spider wire line on. My husband tried to get his head in the net and flip him in the boat. When he went to pick him up he popped out the lure and it went flying out. His gill got stuck on the outside of the net and he dragged him in. I have more pictures of it. But, we let it go. Everybody wanted me to stuff it, but, I couldn't.