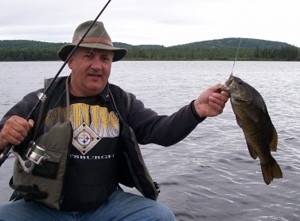 We were on vacation on an Adirondack wilderness lake(no motors).
My wife and I were paddling around the first morning there. I caught all the fish on a MEPPS Aglia with a rainbow pattern blade.
I caught seven fish in this range and another ten that were keepers. Also,I caught seven rock bass on the same lure. Yes my wife also caught some fish but mine was the biggest. We are planning a trip to the same lake next year.
Ron