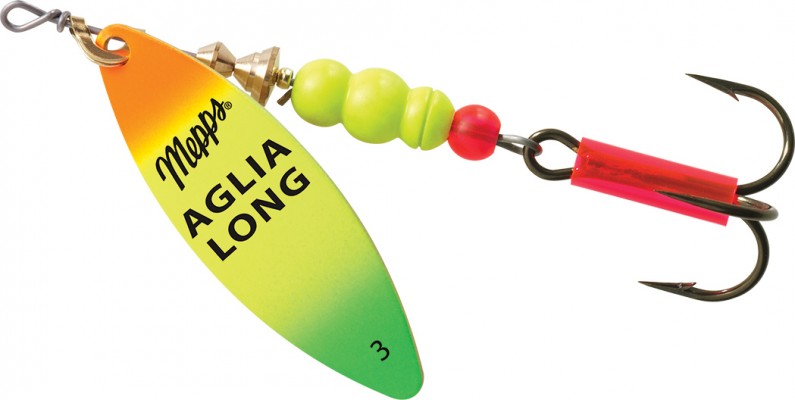 All Mepps Aglia Longs are deep running spinners with willow leaf blades. The blade "hugs" the body of the spinner during retrieve, allowing it to stay in deep pockets long enough to attract a wide variety of fish.

Lure size is important. The rule of thumb is use smaller lures to catch smaller fish and larger lures to catch larger fish. Keep in mind plain spinners present a smaller profile than dressed spinners, so they will appear smaller to the fish. This makes them perfect for panfish and small stream trout. Fishing with dressed spinners can produce larger fish, but, when stream trout fishing, you will probably catch more fish using plain spinners.

Mepps dressed Aglia Longs come in sizes #00 through #4. The Aglia Long Mino is available in size #0 through #4. A #00 Aglia Long is an Ultra Lite spinner. It weighs only 1/18 oz. A #4 Aglia Long, by contrast weighs 1/2 oz. The Mepps Aglia Long, in all styles, like the Mepps Aglia, is extremely popular with fishermen world-wide because it will catch just about any freshwater fish and many species of saltwater fish.

Size #00 Aglia Long hackle-dressed trebles or single hooks, and #00 Aglia Long Wooly Worms are perfect for panfish (bluegills, sunfish, perch and crappie) They are very light, however, and require a nimble rod, equipped with a light action reel spooled with light line; nothing heavier than six-pound-test. Two-pound-test to four-pound-test is better. Size #0 dressed and plain Aglia Longs and the #0 Aglia Long Mino will catch small stream trout. 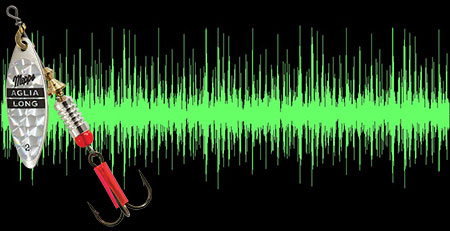 The Mepps Aglia Long features a willow leaf blade that "hugs" the body of the spinner allowing it to run deeper than most other spinners. Because the blade is long and narrow and it spins close to the body of the spinner, the Aglia Long does not produce a heavy "thump." Instead, it produced a muted "chug" during the retrieve. The Mepps Giant Killer features the heaviest willow leaf blade we offer. It sounds like an old steam locomotive as it is being pulled through the water. If you listen carefully you realize the smaller #2 Aglia Long blade produces a sound very similar to the Giant Killer blade, but, it is much more muted.

I fish the Mepps Aglia Long in the #0,1 and 2 blade sizes. These lures absolutely put fish in the boat. They will catch anything!! Primarily fishing for bass, walleye and panfish, this is my go to lure. I usually have 2 rods rigged with an Aglia Long with different blades. One of them is going to work. I fish a lot, and can't recommend these enough!!

As a kid over 40 years ago, I started using Mepps spinners, joined the Master Angler Club and collected many chevrons. For most of my adult life, I lived in an area not particularly known for bass, but recently relocated to Florida. I still have some of my spinners that are over 40 years old. While all the locals swear by their plastic worms, I pulled out my number 1 Aglia Long to fish in the little pond behind my house. The bass absolutely love it. I mostly catch 10-12 inchers, with a few 12-15 thrown in, but the action is always fast and furious. The other day though, something hit me really hard. I couldn't believe it when I brought in a 26 inch bass that was 20 inches around. I don't have a scale, and I'm a catch and release guy, so I got my wife to take a picture and I released it quickly. The internet calculators say it was probably somewhere between 10 lbs 6 oz and 11 lbs 2 oz based on the length and girth. I've seen pictures of bass like that, but never one in real life, let alone in my hand. It blew away my personal largemouth record of a little over 6 lbs. I just want to thank Mepps for being my go to lures, and to let anyone know that if you have something that works, stick with it. I probably wouldn't be catching anything if I followed what the locals do.

I caught a 42" Northern Pike using a #4 Spinner (Glow in the dark lure). As a rule, I usually use the #3 Aglia Long and it catches all species in my area as well as a large variety of sizes. In my Opinion the Mepps #3 Aglia Long is the best all around fishing lure on the market.

I have used the Mepps #3 Aglia Long for 20 some years and it is the best lure I have ever used. In fact, it is the only lure that I have in my tackle box. The only problem is that you do not sell them anymore. However, you have a young lady that works in your sales office that took the time to find me some. I would like to thank Mary Golbach for all her effort in finding us some more of the best lure there is.

On hearing that the Inland Fisheries had just released 700 large Atlantic Salmon into Lake Barrington which is only 15kms from home, I decided to go and fish for them. On arrival, the lake was like a sheet of glass not a ripple any where, so, I headed down to fish off one of the pontoons set on the lake edge. I attached my Aglia Long Rainbo Scale (No.5) to my line and started casting, after 30 minutes, I hooked and landed a well conditioned 4.6kg.fish. Another victim of a great Mepps product.

Well one day I went fishing at my favorite fishing hole. I was using my Aglia Long treble hook Rainbo Scale. As I was reeling it in I caught a 14 incher bass! At a diffrent lake later, I caught another bass. Both bass caught on my Aglia Long, Ive been testing it now it's summer and haven't had any luck. I think they like it in spring. Try it in Spring.

Well one day I went fishing at my favorite fishing hole. I was using my Aglia Long treble hook Rainbo Scale. As I was reeling it in I caught a 14 incher bass! At a diffrent lake later I caught another bass. Both bass caught on my Aglia Long, I've been testing it now its more into summer and haven't had any luck. I think they like this color in Spring. Try it in Spring. I also one was reeling it in and felt a bite and set the hook but didn't feel anything so as I was pulling it up I saw a 2 inch bluegill on it!

Today, I caught 15 Rainbow Trout in about an hour and a half with my Aglia Long. Most of them were pretty nice. Now, that spot I was fishing in is my favorite fishing hole! I cast right beside a "special" bush, reeled it in about ten feet and WHAMMO! a fish would bite, I'd set the hook, and bring it into the canoe. I'm a young fisherman, only 9 years old and I love fishing! Thanks, Mepps, for the fantastic lure!

On August 7th 2009, I caught a 29 inch pickerel on a Mepps Aglia Long #3 with a Silver prism style blade. I was throwing it next to a stick pile in shallow water(maybe 4 feet or so)using a meduim retrieve, when all of the sudden the pickerel hit the bait so hard it nearly ripped the rod right out of my hand. It jumped 2 ft out of the water. I fought it for 15 minutes before landing it. The pickerel was 4 lbs 2 ounces. I went to have it weighed and it was 1/2 pound off from receiving a state pin. Thanks MEPPS!!!!! This bait rules. Keep up the good work.