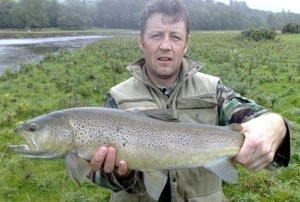 Salmon fishing with my friend. He just caught a salmon about 14lbs. I casted in after its return, saw a huge wave fly behind me and bang! Heck of a fight, thought it was a salmon til I landed it, couldn't believe it was a trout biggest caught on Severn River.