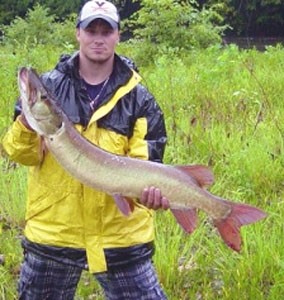 A few of the guys I work with knew all I ever did was Carp fish. They told me it was time for a change. One evening I met up with one of the guys, I had no big spinners or plugs, all I had ever needed was a can of corn and a couple of Mountain Dews. He let me use his spinners we fished that evening till dark, we had quite a few chases but we didn't hook any. That's all it took I was HOOKED. A week later I got up at 7am drove an hour to the bait shop, I bought 6 spinners and a 10' pelican boat. I drove back to the river and met the guys at noon. Just twenty minutes later I had landed my first Musky.....All I can say is thanks guys Ive got a new hobby.