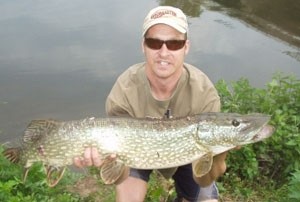 Had an awesome week catching pike with my Mepps spinner. Before I got this 29 pound fish I probably caught 15 more pike earlier in the week form 10 to 15 pounds. This 29 pound fish was landed with no landing net. I had to jump down a steep bank into the river to get my hands in her gills.