Steelhead Caught by Ted with Mepps Trophy Series in Indiana 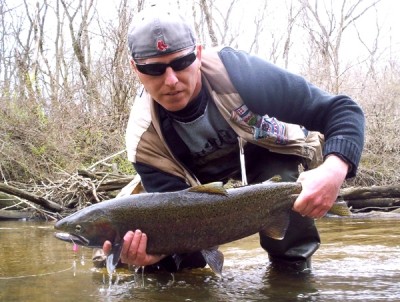 This was a very fun catch. I was walking back upstream when I heard a splash in shallow water in a place where Steelhead do not hold. But when I looked I saw 3 steelhead. 2 males were fighting each other while the female worked on her redd. So I took a few casts at the males. But they were so into fighting each other they really did not care about hitting my Mepps. So I kept trying. Then wham the male in the back came up and swallowed the spinner. I set the hook hard and my line broke right away. The line must of caught the fish's teeth. So I was mad because it was my lucky new lure #3 Glo Chartreuse. I was thinking oh great that fish just ate my spinner and now I won't get it back. So I put on my silver/pink trophy series. Took a cast at the big male next to the hen. He came up and nailed the spinner hard. I set the hook and got him in. So after I let the fish go, I had a gut feeling that I should go look in the water for that spinner where that fish hit. So I did and there was that spinner. I got lucky to find it. The fish must of spit the hook as the line broke, or perhaps the line broke before the hook was set into his mouth. Anyway, glad I got the spinner back instead of the fish keeping it for himself. lol Good times!