Musky Caught by Chrissy with Mepps Black Fury in Ontario 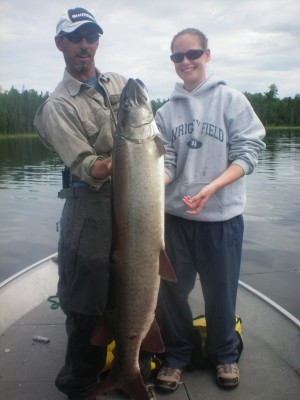 During the last week of July this year, I took my 13 year old fishing in Western Ontario on the Lower Manitou. This was her third trip there. On the morning of July 31, we portaged to a small muskie lake . We had little luck and I managed to catch two small muskie. My daughter was quite disappointed and we returned to the big lake for an afternoon of fishing.. Around 12:30 P.M. my daughter thought that she had a snag in the weeds while casting. The weeds started to pull back and we knew that she had something. The drag started singing and she soon realized that she had hooked a size-able fish. After about ten minutes we got our first look at a giant musky. The fish's diameter was incredible.(in all the excitement we forgot to measure) The fight took over 20 minutes and he made several runs, once trying to catch the line around the motor. The muskie was 47 inches long, and just a pig. We guessed it's weight around 37 pounds or more.