Musky Caught by Scott with Mepps Giant Killer in Ontario 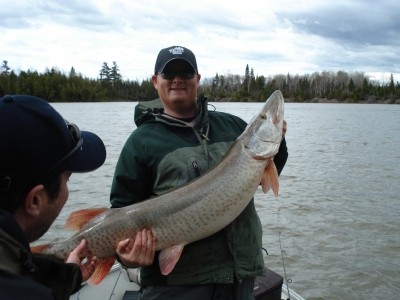 I have never been so electrified as I was that day. A friend and I took a fishing trip far from home which is Burlington. 22 hour drive later, still in the same province, we arrived in Dryden, Ontario. We were setup through the local bait shop with lodging and 16ft aluminum. The bait shop owners son, Kyle, die-hard fisherman at the age of 14, offered to take us to some of his honey holes. My friend, Ian, and I agreed and the next day we meet at Kyle's and were on the water by 8:30am. Ian and Kyle both being walleye fisherman were jigging and bouncing all day, I was jigging but throwing my Giant Killer as well. This lake known for it's 10-14 lbs walleye and big musky is cold in the spring, water temp 50-54. We fished all day but fishing was slow, maybe ten picks all day. So Kyle decided to call it a day and hit a few spots on the way home. We pulled up to a spot where two big islands came together with about fifty yards between them. The water came up out of 30ft to 14ft between the islands. We setup on the back side where the wind was blowing through. Two cast later, I am reeling as my lure hits the water 60ft from the boat, the lure drops 2 feet and bang! I feel the hit. I set in to this fish like I am trying to rip her lips off and from the moment my med-heavy action rod started to bend I got nothing but drag, so I reel down and pulled again but the drag just peels from my reel, as I say wohohoho this is big. Ian reels up his line and gets the boat ready for this fish. I pull again and it feels like just a mass in the water, it raises up letting her back graze the top of the water, silver with a green tinge. Oh my, its a musky wohoho. When she came to the boat we saw that all three points of the hooks were in the max. The fish then made some good powerful runs. When it came back to the boat we realized that there are only 2 hooks in. The fish makes another run striping line but shes ready to come in now. As I bring her along side the boat now, there is only one hook in. I thought to myself this fish has got to come in now. Kyle has a small walleye net which he places in front of the fish and Ian gets down and slides one hand around the belly and the other around the tail, while pushing the musky's head into the net Ian flips the fish over his head into the boat. As the fish hits the ground the hook comes flying out of her mouth. After freaking out for a bit we took some pictures, but in a hurry to get the fish back in to the water, we forgot to get a girth measurment, so the weight question is still up in the air. The release was one of the best moments, watching her swim away after a good ten minute fight. The musky measured in at 50" and was caught using med-heavy action rod, 20lbs braid and a big old GIANT KILLER.