Musky Caught by Mark with Mepps Musky Killer in Ontario 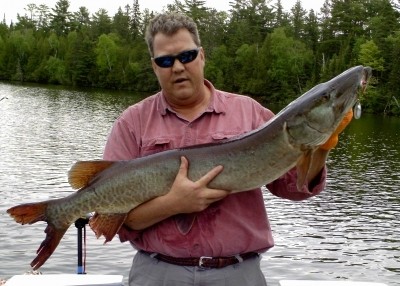 I had purchased a couple of Musky Killers 6 months before the trip up to Canada and dreamt every day about catching the "big one" in my favorite bay. Well, 6 months later, we were pulling out of that very bay and I threw my favorite cast over the back of the boat and reeled it in slowly. I could feel the heavy "thump, thump, thump" of the blade as I reeled in over a weedbed, and Bang - I thought I hooked a log. Well, that log eventually fought back and 6 minutes later, I was pulling a monster 45" Musky into the boat. Released the same so someone else can experience that too. Not bad for the first hour of fishing. Caught a 36" Musky the next day on a Mepps-5.