Trout Caught by Jake with Mepps Aglia Long in Washington 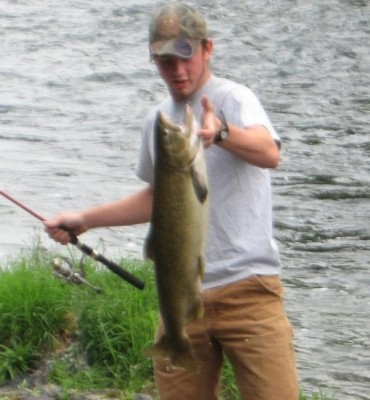 I was on a family campout and I just happened to buy some of the red and white Mepps Aglia spinners at the local store, I had never tried one and it looked like it could catch some trout. I fished up an down the river which was not large catching many cutthroats ranging from 10"-15" an found a pretty nice hole and caught two bull trout that measured out at 26" an 28" biggest bulls I had ever caught. The next morning I walked down to the same hole and on the first cast I hooked into a 33" chinook salmon after an hour long fight(I was only using 6lb test on a trout rod) I finally landed him, I retied on the Mepps figuring the knot had been strained and two casts later hooked into a 35" brown trout...supposed to be an inch shorter than the state record but I wasn't able to weigh it and the measurements were by length of arm until I found a tape measure, wish I could have kept the fish to mount but it was all catch and release. I have recommended this lure to all my friends, its the only one I'll buy now when I head out to go fishing. This lure will literally catch anything you want it to.