Pike Caught by Cox with Mepps Musky Killer in Ohio 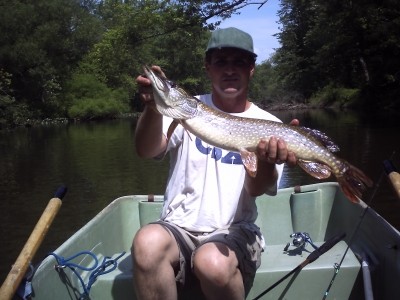 Was doing well all spring with jerk baits but now that the water has warmed up decided to try the Musky Killer. At first I was afraid of snags because the river is shallow and full of snags, but, the Musky Killer can be fished right on the surface. Had a half an hour left to fish and as soon as I switched had a great strike and miss then a few minutes later....POW. Went AIR BORN after the bait! I truly believe fish are triggered by different lures but when it heats up and the fish get lethargic the Mepps is my go to lure!!! I also like size 5 Black Furys and Aglia size 5 with the blue blades. See my previous pics on here!