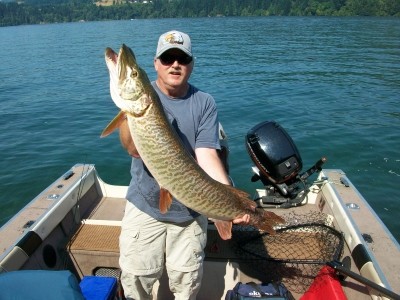 Fishing Merwin with dad, day was going to get really hot so we decided to only fish until 1:00PM. Dad had already released a 34-inch Tiger caught on a Black Fury Musky Killer in the Black/Chartreuse version and we lost 3 more that hit the same bait. We had found these fish earlier in the day on a place callied Muskie Flats, but couldn't get anything to bite. It was getting close to 1:00 so I said, "let's go and try the flats again before heading out", and, on my last cast I caught this beautiful Tiger. Another great day using a great bait fishing with dad.