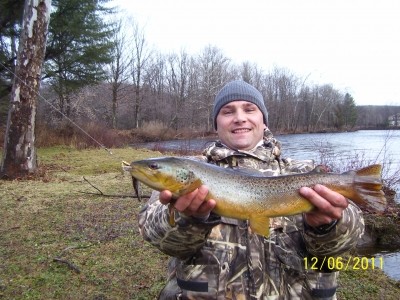 My brother who is active duty military with 20+ years of service was home for the holidays. Usually we would be skiing but the above average temperatures in upstate New York and no snow forced us to fish a section of the West Canada Creek which is special regulation-no kill artificial lure only open all year.It was 35 degrees with light snow/sleet. I caught and released an 18 brown on a Mepps Aglia Streamer within the first 5 minutes of fishing. The next brown (pic enclosed)was a tank at 21 inches on the same Mepps Aglia Streamer. Thank you for making such an effective lure that produces at any time of the year!