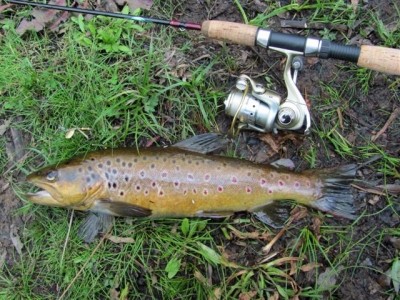 Well what I thought that the fishing the Minnow River was going to be a loss it all turned around after 20 minutes of spinning in bright sunny conditions. Fished a 1km section of river that I haven't
been to for about 6 yrs and this stretch of river that has quite a bit of dense scrub along it gave up a few browns today. The river was fairly low and still had it's usual dark tannin colour to it which I
don't mind as this gives the fish that beautiful golden glow when out of the water, and makes for a great photo. Started off with a Mepps #00 Gold Aglia spinner and things were a little slow for a while,
as I never had a follow or even spooked a fish in the shallow water. Then after spinning my way slowly upstream finally hooked into a nice solid little brown and after a brief fight had this 510gm fish on the bank for a quick photo and then released back for another day. Over the next 150 meters or so, had two more hook-ups but these didn't hang around as they were off the spinner as quick as they hit it. I wasn't too bothered though as I was happy with how the day had gone so far and it was still a top afternoon on the Minnow. Another 100 meters or so, I then hooked into another fat brown and this fish was a little smaller than the first was also released back into the river. With only a short distance left before getting back to the Trout Stalker ute the brown of the day was on that gave me one hell of a fight in this small body water. After racing upstream and then back down again and making several leaps for freedom he was on the river bank, and it was a beautiful golden specimen too. The red spots with the white rings around them really stood out on this fish that tipped the scales at 690gms of pure muscle, only problem was he had swallowed the Aglia and was bleeding from the gills. When this happens, I never put them back into the river as they won't survive any way, so out with the donger and it was all over in a flash. This stretch of river doesn't allow for any mistakes when casting as it has a lot of very tight stretches of water and acurracy is a must. So, yes I had another great day out on one of Tassies great little streams once again, hmmmmmmmm! Just love them, chee