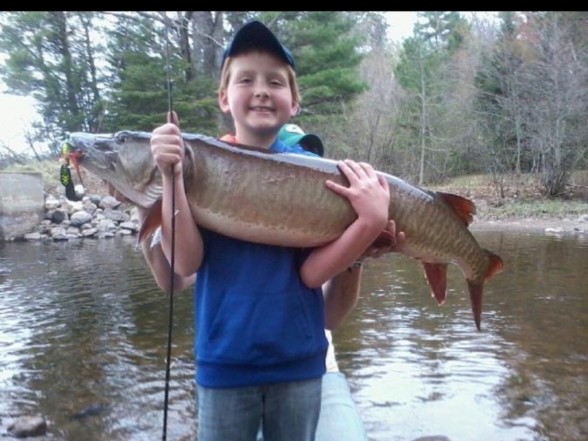 I've already written a testimonial for this, but, here's the picture. So, I started out fishing as I usually do...getting in my dad's car and going out to my favorite lake with him. When we got there, I got out and went down below the dam coming off the lake, as I knew I would be able to see the fish because the day before I had caught suckers and the water had been down to less than a foot in some areas. So, I went down and saw it. So I ran screaming DAD GET MY POLE, MY POLE!!!!! My pole being a bluegill pole wouldn't have done much, but, me being me, I tried anyways so I put on Rapala's and a bunch of other stuff. Just regular size #4 and #5 Black Furies were working the day before, so I put on a Mepps Black Fury Musky Killer and presto 3 casts later I had the monster hooked, but, the line snapped out of pressure. So, I then put on a wire trace and a Black Fury #5 chartreuse and got my lure back when a random guy from the crowd of people I had generated said "I can get it just bring it in so I can get it. A few minutes later it was released in good health after a few pictures.