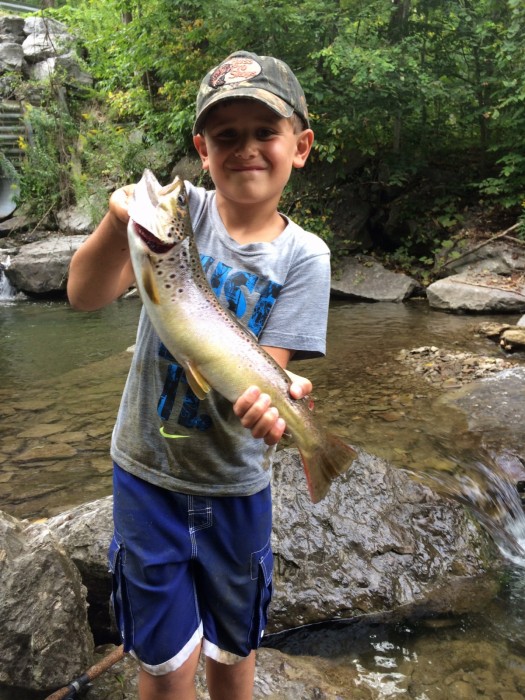 My son and I were stream fishing on Labor Day. We were walking up stream from one creek to the next. When we arrived the water was stained from clay run off from the night before rain fall. Bummed about our conditions, we continued up stream. What I thought would be an hour wade, turned into 2 1/2 hours.Trying to keep my son interested the rest of the way was difficult. I spotted the bridge that would lead us to our truck. As we approached our way upstream, there it was " a big beautiful deep clear hole". My excitement level rose as I told my son,"Get ready"! I explain exactly how he would fish it and told him I would videotape it from across the stream. He was spot on with his two handed casts, 4 ft ultra lite rod and 4 pound test. Aim for the white water, let it sink on a two count and reel in! 3 beautiful wild Rainbow's and a spectacular 17" wild Brown! 4 fish on 5 casts. His smile was ear to ear, so was his proud father's! Double 00 aglia's have always been my lure of choice for fishing secluded Trout Stream's in the Southern Tier of Western New York.