Bass Caught by Shawn with Mepps Aglia Flashabou in Maryland 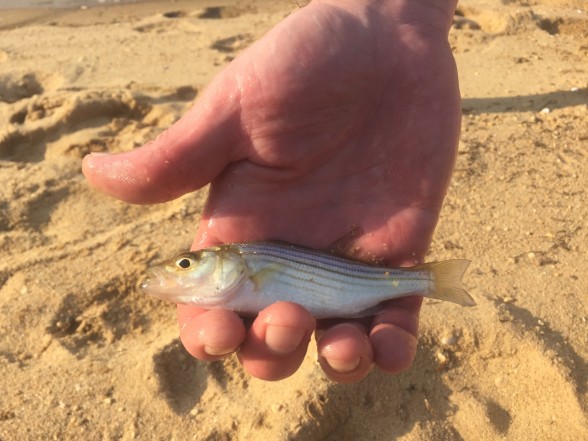 I am a fisheries biologist with over 30 years of experience in fish handling - trawl surveys, seine surveys, gill netting - mostly in the Delaware Bay but also in the Chesapeake and Hudson estuaries. In that time, including my father-in-law's striped bass hatchery in Delaware (Delmarva Aquatics), I've handled hundreds of striped bass, including big mamas up to 50 - 60 lbs for spawning (all legally caught in a gillnet, spawned, and released live). On July 4th, while fishing with my son from shore in the upper Chesapeake, I caught my first hook and line striped bass of my life! I caught it on an Aglia that my son found tangled up in a tree, Two of the treble hooks were straightened out and we had to break them off, so I only had a single hook (and there was no dressing, just brass and spinner). This little guy hit on the first cast! After we wrapped up fishing for the day, I promptly went to the tackle shop and bought a bunch of new Aglias...these will be the first lures I reach for! Hopefully, I'll get a bigger striped bass the next time out!