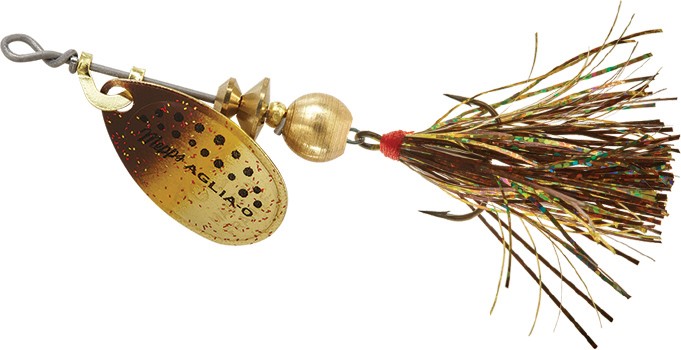 The Mepps® Aglia® Flashabou combines the vibration and flash of a classic Mepps® Aglia® blade with a highly reflective, hand-tied flashabou tail for attractive, shimmering action in the water.

Lure size is important.
The rule of thumb is use smaller lures to catch smaller fish and larger lures to catch larger fish, however, size #5 Aglias are also known to be a great musky producer!

Size #1 and #2
Dressed Aglias in size #1 and #2 are perfect for larger stream trout and large bluegills, sunfish and crappies. Size #2 Aglias are also excellent for smallmouth bass and walleye.

Size #3 and #4
Mepps Aglias in sizes #3 and #4 are preferred by largemouth bass fishermen.

Size #5
Northern and musky pike will be quick to nail a #5 Aglia® Flashabou in either double or single-blade configurations as it produces exceptional flash over weeds and structure.

There is something about that extra flash that will out fish other baits. A number 1 slow rolled will slay trout. I have also caught my person best bluegill on a number 3 along with a 4.5lb bass on a number 1.

The Mepps Aglia Flashabou is a great lure. I used the chartreuse blade and chartreuse tail color (size 2) in a stocked pond and caught a cooler full of fish. I caught one nice bluegill, four or five small bass, and about a dozen rainbow trout. Two of the trout were about two pounds a piece! I lent my trusty silver Mepps Mino to the owner of the pond, but he only caught one trout and one bass with it (most of the time I love to use the Mepps Mino). Today I used the right color and was well rewarded. Thank you one again Mepps for making the World's #1 Lure.

This is the only bait that I have ever used that can catch 3lb largemouth and 3lb rainbows from the same spot using a #2 silver blade with black tail. I need to get more colors just wished they were not so hard to find in the stores in Virginia.

Best lures ever.. Hands down..
The new flashabou line is just awesome.. This is my second order this year. Although, I'm still killing the lakes in Michigan with them, I'm happy to inform that I just came back from a fishing tour around America. Outside of giving away one silver/red flashabou to a youngster in Wyoming (after I caught 9 fish on 10 casts), I fished them until I lost them. ;) Had great luck in Yellowstone (pinched barbs), Snake River(Swan valley), North Platte, Merced (Yosemite) and the Colorado River. They really work in most all Lakes and Rivers, and I caught more than 9 species, in 11 states, with the new flashabou's.. so far. ;)
If I could make one suggestion, Please make more flashabou tail colors, and have more of the Aglia spinner blade colors? ;)
Kevin Davis- Hazel Park, MI

I bought a few Mepps Lure including this one in the red, white and gold #5 for a last minute trip to Canada. This lure did not disappoint. I had several northerns caught using this lure. My biggest catch was a 41 1/2 inch Musky. The fish attacked it immediately and the Mepps held strong. Thank you for making this quality lure allowing me to catch an elusive musky.