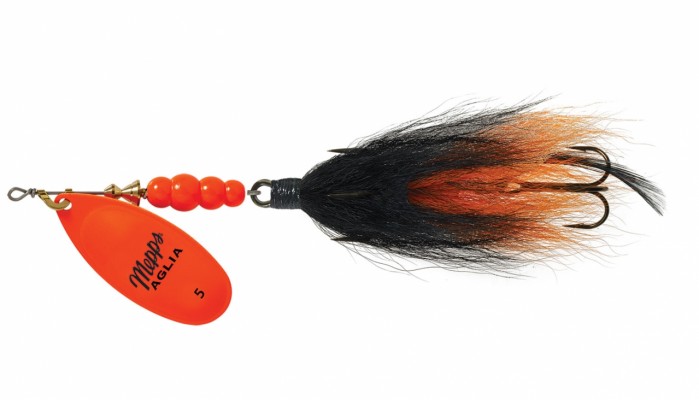 The hand-tied tandem tail is genuine bucktail, dyed in brilliant fish-attracting colors. Not only does the tandem tail give this lure a larger profile, the #2 "stinger" hook lets you "cash-in" on those short strikes. Solid brass blades and bodies, a durable stainless steel shaft and a rugged folded solid brass clevis means this lure will hold-up under the toughest fishing pressure.

I am writing this not disappointed but happy. Your tandem Aglia spinner has made my Canada fishing trip. Catching not only musky but also a 37 inch Pike that absolutely destroyed the lure but not after getting the fish and many more before in the boat. What a great product.

I was saving this Aglia Tandem to use at a musky lake, had been having great success on #5 bucktails for large Northerns off the dam,a high risk, high reward place to throw lures. Seems the Mepps would skip over the rocks better than anything else I would throw. After another lure gone, the Tandem got wet!! Really looks good in the water, bigger tail!! After about three casts, I landed a nice 12lb Pike!!! And, the bigger Smallmouths love 'em too!! Later, Jeff Scheuler Keystone, NE.